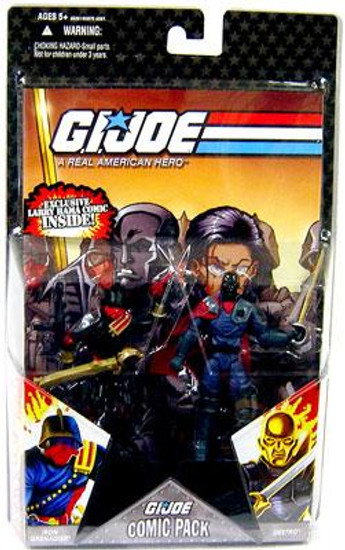 The 25th Anniversary Destro & Iron Grenadier 2-pack is accompanied by an exclusive Larry Hama comic book. Destro features a gold chrome mask, a dark blue uniform and a red fabric cape, and is equipped with a pistol and a saber. Having previously served Cobra in his capacity as arms suppliers, Destro contemptuously differentiates himself from the chaotic dictates of Cobra Commander, stockpiling his own arsenal of weaponry as he builds his ranks with formidable Iron Grenadier troopers. The Iron Grenadier is clad in a dark blue uniform, with a black helmet and red mask, and is equipped with a saber & scabbard. The ranks of the Iron Grenadiers are harvested from among mercenaries and Destros elite bodyguards.
gijoecb5detirov
6535693152232
117838
In Stock
New