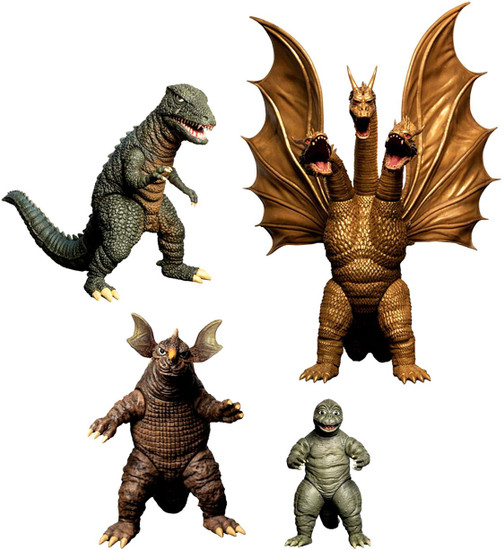 5 Points XL - a colossal addition to our nostalgic 5 Points line with the same fan-fueled fun, but bigger! Its a little bit of a big deal.
Its an all-out attack of monstrous proportions as the battle against the three-headed kaiju king from outer space continues!
This second bursting box of behemoths contains King Ghidorah, Manilla, Gorosaurus, and Baragon and includes select interchangeable heads, arms, legs, or FX.

THE 5 POINTS XL DESTROY ALL MONSTERS (1968): ROUND 2 SET INCLUDES:
King Ghidorah This three-headed space dragon is also Godzillas arch-enemy! King Ghidorah comes with three gravity beam FX that can attach to his three head portraits.
Minilla son of Godzilla. Minilla comes with alternate arms, an alternate head portrait, and his signature atomic smoke ring FX that attaches to his head portrait... hes still working out the whole atomic breath thing.
Gorosaurus The giant dinosaur that utilizes a leaping kick attack, similar to that of a kangaroo.
Baragon A four-legged, horned dinosaur-like creature. Baragon is known to leap long distances, burrow deep into the ground, and use his head to get his point across. Baragon comes with an alternate head portrait and an alternate pair of legs.