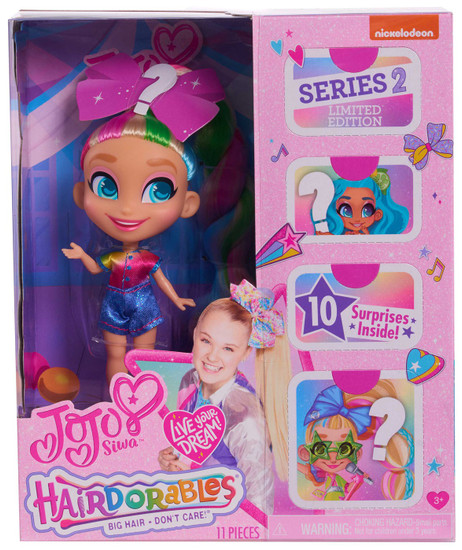 #Hairdorables took off when Noah, a sweet and funny vlogger with a passion for hair-styling, decided to share her side-braiding tutorial on YouTube. While shooting her video, Noah fumbled over the word?s "hair" and "adorable" ?accidentally coining the term "hairdorable"! Her video went viral overnight, and now Noah and her BFFs spend all of their free time creating content and sharing their passions with the world via the Hairdorables channel on YouTube! Just like Noah, JoJo Siwa was an overnight viral sensation. Now JoJo Siwa is showing off her newest Hairdorables inspired styles! Dressed in an outfit inspired by from her Kids Choice Awards appearance, each Special Edition JoJo Loves Hairdorables includes 10 surprises and captures JoJo?s bright personality and inspiring message to live ?the sweet life.? The JoJo Loves Hairdorables Dolls even feature JoJo?s side-pony and include a surprise bow! Collect the JoJo Hairdorable Doll in each of her two styles. Ages 3+
Each package includes 1 posable Hairdorables doll and 10 stylish surprises.
Two Limited-Edition JoJo Hairdorables Dolls to collect!
JoJo Loves Hairdorables captures JoJo?s bright personality and inspiring message.
JoJo even features her signature bow and colorful side-pony.
hairdorjojos2
886144522239
321110
In Stock
New