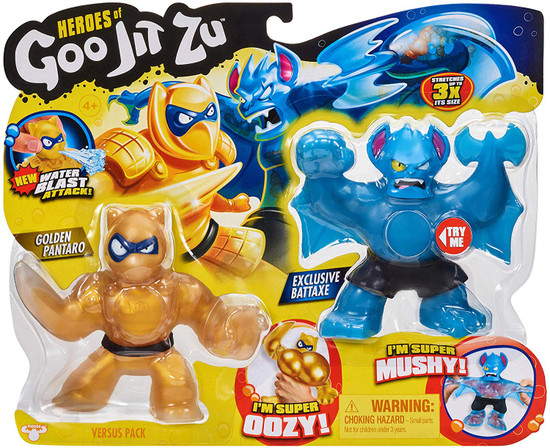 The Heroes of Goo Jit Zu are back and ready to launch a Double-Edge attack! Just as squishy and stretchy as before but now with their Aqua-blast energy and weapon-morphing arms, they are power-packed to smash the enemy! These Super Hero action figures are like no other! Every character has a unique goo filling with a different texture and feel. The Golden Pantaro VS Battaxe Versus Pack contains 2 Exclusive Goo Jit Zu Action Figures so they can battle each other! This Versus Pack contains a special Golden Pantaro Action Figure only available in this pack and an exclusive Super Mushy Battaxe Action Figure. Squeeze their different fillings! Not only does the Golden Hero of Goo Jit Zu have a weapon fist to battle with, but they have a "Water Blast Attack" feature! Fill Pantaro's head with water, aim and fire water! These toys stretch up to three times their size and are more durable that ever before!
pantarobattaxe
630996410523
323719
In Stock
New