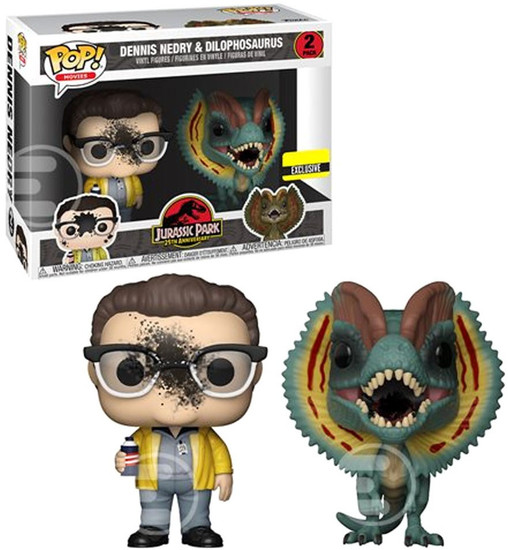 Funko Pops can show minor paint or packaging imperfections. Funko does not consider these defects. While we strive to deliver the best condition, we cannot accept returns due to minor flaws or minor package damage. Thank you for understanding.
$69.99
(You save )

Entertainment Earth Exclusive! Sometimes, it's not wise to mess with Mother Nature. In the 1993 Jurassic Park film, Dennis Nedry meets his fate when he encounters the spitting dinosaur known as the Dilophosaurus. Dennis and his dino foe face off again in this exclusive 2-pack of 3 3/4-inch figures featuring the duo in an incredible goo-splattered deco! The Jurassic Park Nedry and Dilophosaurus Goo-Splattered Pop! Vinyl Figure 2-Pack - Entertainment Earth Exclusive comes packaged in a window display box, ready for play or display. Nedry is shown with a toxic blast of goo in the face, while the Dilophosaurus has the venom on his tongue.