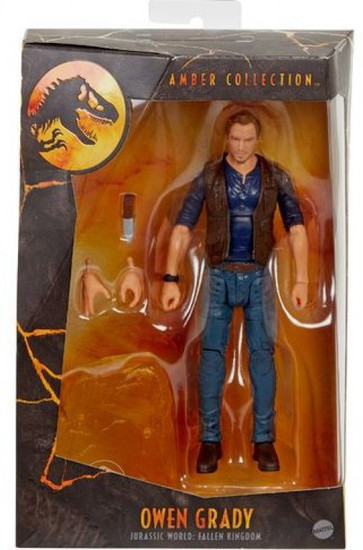 Relive nostalgic, iconic film moments with the Jurassic World Owen Grady action figure! This character captures the spirit of the franchise legacy with movie-authentic decoration and deluxe detail. The Owen action figure is inspired by the Jurassic World: Fallen Kingdom film and captures the scene when Owen returns to Isla Nubar to help save his trained velociraptor "Blue," who Owen learns is in danger. Finding Blue in the jungle, Owen extends his hand to her, but little does he know that she will later end up saving him. Action figure is approximately 6-inches (15.24 cm) tall and features movable joints for pose and play action! Figure also comes with a removable toy "knife" accessory, an extra set of removable hands and a stand to display the figure. Take home the excitement of Jurassic World: Fallen Kingdom with this collectible Owen Grady action figure!
jwowengrady
887961814514
317401
In Stock
New