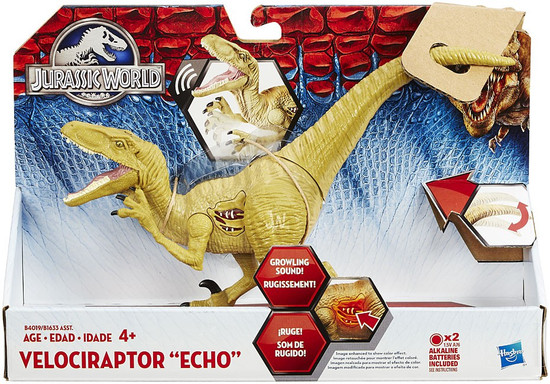 Don't let Velociraptor Echo scare you with his claws and growlin action. Grab your fierce Echo the yellow dinosaur action figure today!
Velociraptor Echo dinosaur action figure has the claws and jaws to take on any foe. His side shows the damage as the battle rages on and as his terrifying growls fill the air! Theres going to be maximum dino-on-dino action with your Velociraptor Echo figure! Hasbro and all related terms are trademarks of Hasbro.
Chomp, stomp, and ROAR! The Growlers assortment has the same thrashing and biting action as the Bashers and Biters assortment but also adds ferocious sounds to the fight! Each Growler stands eight inches long and features LED battle damage! Screech from the skies and descend on your prey with Dimorphodon! Or distract from the front and come roaring in from the side with Velociraptor! Includes one figure. Each sold separately.
growlerecho
630509343430
127352
Out of Stock
New