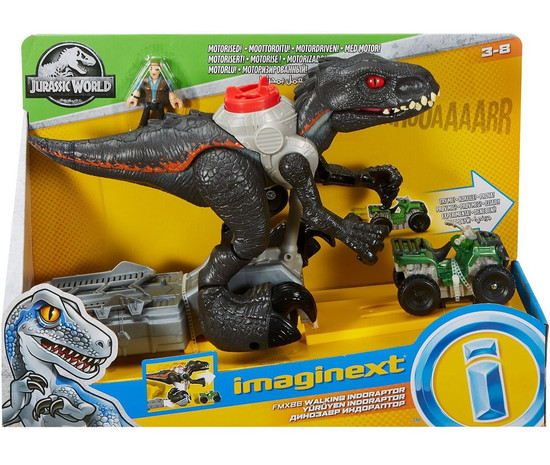 Create exciting Jurassic World adventures by sending this ferocious villain dinosaur chasing after Owenit walks all on its own!
Whats that booming sound Its the ferocious Walking Indoraptorits on the loose! With the turn of the Power Pad, kids can send the angry dinosaur stomping forward on its own. Place Owen in the ATV and send him racing into action! Roll the ATV in front of the dinosaur to provoke it into chase modethe faster the vehicle rolls, the faster the Walking Indoraptor will chase! Can Owen get this dangerous dinosaur under control Thats for your young adventurer to decide! Imaginext Imagine Whats Next!
Roll the ATV in front of the Walking Indoraptor to see it chase after Owen!
Turn the Power Pad to send the dinosaur stomping forward
Walking Indoraptor has two stomping speeds: Walk along or rushing speed
RAWR! Push the Power Pad to open its mouth
imagwalkindorap
887961584349
257093
In Stock
New