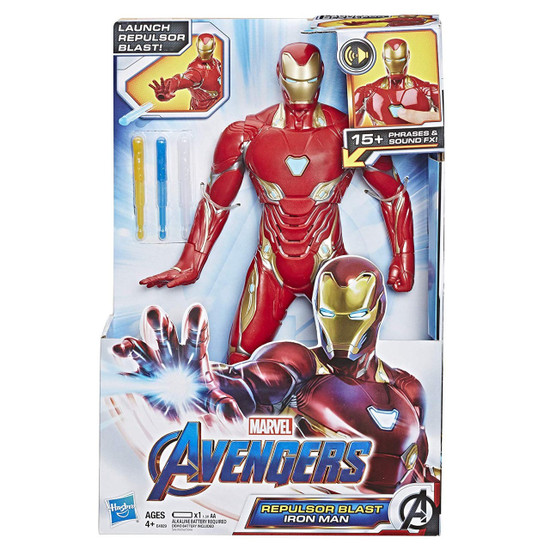 Tony Stark gears up in his suit full of technological upgrades to become the Armored Avenger, Iron Man.
Imagine the incredible, super-powered action of the Avengers with figures, roleplay, and more inspired by Avengers: Endgame! Avengers: Endgame is the long-awaited next chapter in the Avengers movie franchise that includes Avengers: Infinity War. The Avengers movie franchise stars fan favorites such as Captain America, Iron Man, Spider-Man, Black Widow, Thor, Hulk, and Black Panther. With Avengers: Endgame-inspired toys, kids can imagine suiting up like their favorite heroes and playing their part in saving the galaxy!
This 13-inch-scale Repulsor Blast Iron Man action figure features 20+ sound effects and phrases from the Avengers: Endgame movie, part of the Marvel Cinematic Universe. Fans and kids can activate the repulsor blast feature and imagine the armored Super Hero battling for the future of the galaxy alongside the other Avengers.
avengerfeatiron
630509784738
292536
In Stock
New