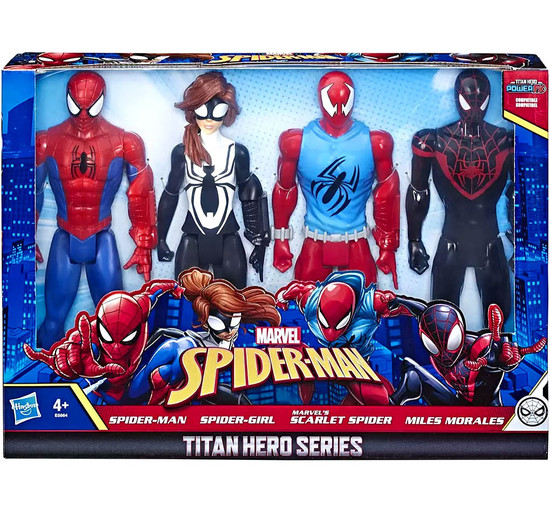 The Marvel Universe Titan Hero Series features Spider-Man, Spider-Girl, Miles Morales, and Marvels Scarlet Spider, who are all heroes with spider-like abilities battling the forces of evil. Imagine leaping into adventure with Spider-Man figures, vehicles, and roleplay items inspired by the Marvel Universe. With this classic inspired line of toys, kids can imagine all the action of the Marvel Universe with their favorite heroes.
Product Features:
12" scale action figures let kids imagine the action of Spider-Man on a big scale.
Fans can imagine wall-crawling battles against villains in a fight for the fate of the world with these Spider-Man figures, inspired by the characters from the Marvel comic books
Connect Blast Gear launcher (sold separately) to backport or arm port on Titan Hero Series and Titan Hero Blast Gear figures to launch projectiles with the push of a button
Be on the lookout for other Spider-Man figures and gear to imagine brave heroes defending the world from evil (note: additional products each sold separately)
Includes Spider-Man, Spider-Girl, Miles Morales, and Scarlet Spider figures
martitanspmangirlscarlmiles
5010993743674
379120
In Stock
New