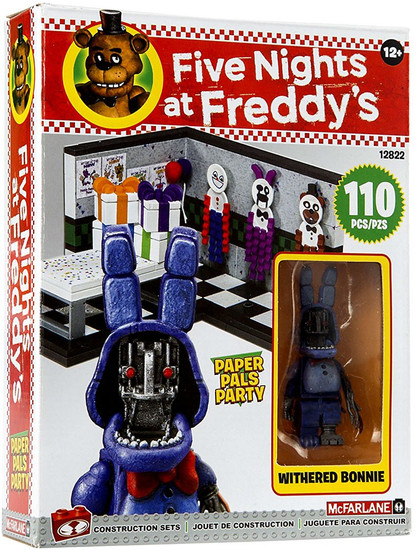 Party Room number 4 in FNAF 2 is one of the more unique rooms in Freddy Fazbear's Pizza. The room is decorted much like the other party rooms in the restaurant, but only this room features the Paper Pals! Constructed out of paper plates and streamers, the most simplistic version of the animatronics might be the creepiest.
PRODUCT FEATURES
Buildable ""Paper Pals Party"" set inspired by Scott Cawthon's Five Night's at Freddy's video game series
Construction set features a buildable Withered Bonnie figure, and comes with Paper Pals, presents, and balloon acessories
Contains 109 pieces
Figures feature articulation in the main joints and have swappable heads/limbs
Bricks and figures are compatible with other construction brands