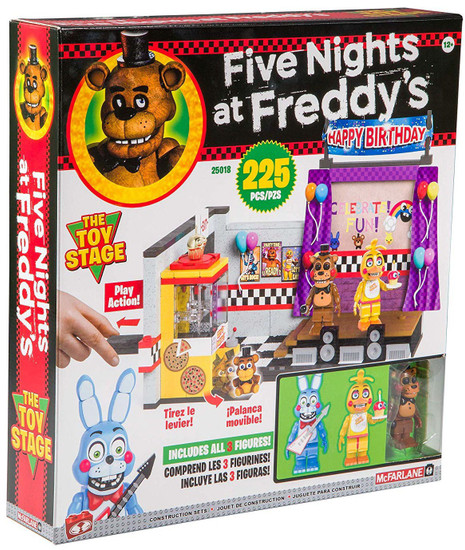 The world of Five Nights at Freddys is rich and mysterious, and the fan base is hungry to discover all of its hidden secrets. The series spans seven games, a best-selling series of books, and an upcoming movie directed by Chris Columbus and produced by Blumhouse. The Five Nights at Freddys McFarlane Construction Sets are immensely popular, with sales placing them in the top 10 selling boys items at major retailers nationwide, and the best-selling brand in history of McFarlane Toys!
Fun to assemble diorama of the Toy Show Stage from the best-selling Five Nights at Freddys 2
Features a buildable play-action crane machine that really dispenses a fun prize
Includes buildable Fan-favorite animatronics - Toy Freddy, Toy Bonnie and Toy Chica figures.
New, improved instructions make building fun for experts and novice builders alike.
mcfarlanetoyroom
787926250183
288750
Out of Stock
New