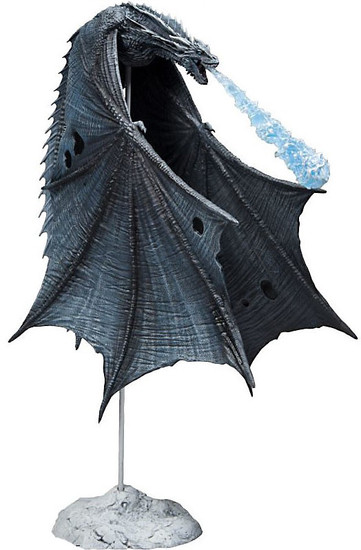 McFarlane Toys is proud to announce the lead-off figure to the much anticipated return of McFarlane Monsters, Viserion. Along with his brothers Drogon and Rhaegal, Viserion was raised since birth by Daenerys Targaryen, however, after being fatally wounded, and then
resurrected, Viserion has now fallen under the command of his new master, the Night King. Under the Night King, Viserion would blast away the Wall in Eastside with his now blue flame, allowing the Army of the Dead to enter the Seven Kingdoms. McFarlane Monsters
aims to give fans of creatures, monsters, and fiends exactly what they've been wishing for.Incredibly detailed figure of Viserion showcasing his ice dragon form from the season 7 finale of Game of Thrones
Movable tail, legs, wings, and neck totaling over 10 points of articulation
Viserion's wings span 16.5" wide and features up and down movement
Viserion measures 9" x 16.5" x 10.5" fully displayed on elevated base
Figure comes with removable burst of blue fire.
mcfarlaneviserion
787926106558
277720
Out of Stock
New