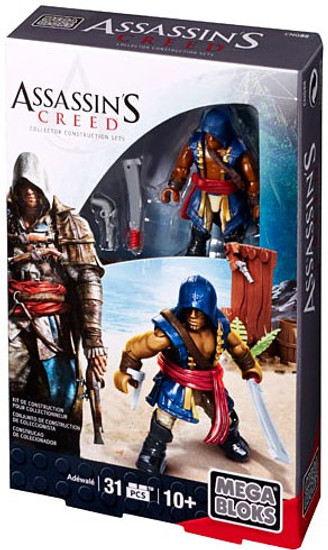 Calm, cool and collected, Adéwalé stands at the ready. A cynical pirate-turned assassin, Adéwalé by Mega Bloks Assassins Creed comes in an authentic assassins hood and vest, prepared for the worst with his signature machete and a pistol. Build the scene, featuring a weapons rack and gunpowder barrel, and display the highly detailed, super-poseable micro action figure, armed and poised for attack.
One highly detailed, super-poseable Adéwalé micro action figure with detachable hood
Buildable display environment with weapons rack and gunpowder barrel
Comes with detailed weapons and accessories, including signature machete, pistol and hidden blade
Collect and combine with other Assassins Creed buildable sets by Mega Bloks to recreate epic battles and adventures!
megablokscng88
065541381575
126993
Out of Stock
New