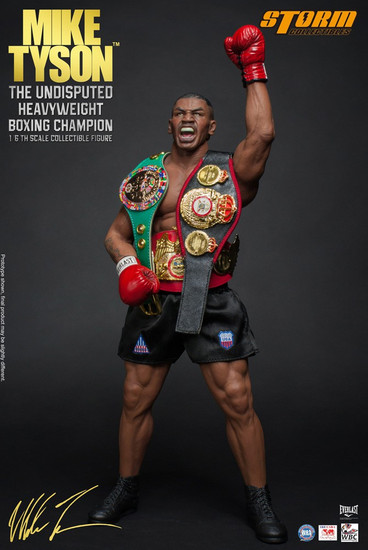 MIKE TYSON won his first title fight via a second round TKO against Trevor Berbick for the World Boxing Council (WBC) heavyweig ht championship. Tyson would go on to win the World Boxing Association (WBA) title from James Smith and would later become the first undisputed heavyweight to hold all three major boxing belts when he beat Tony Tucker for the International Boxing Federation IBF title.
Storm Collectibles is proud to be the first company to be granted official licenses from the WBC, WBA and IBF to produce their championship belts exclusively for our 1:6-scale Mike Tyson figure. An intricately detailed representation of Mike Tyson in his mid-era boxing career and the 3 major boxing championship belts that he earned in his early ages. This is the collection that all Mike Tyson and boxing fans do not wanna miss.
stm87021
4897072870169
150143
Out of Stock
New