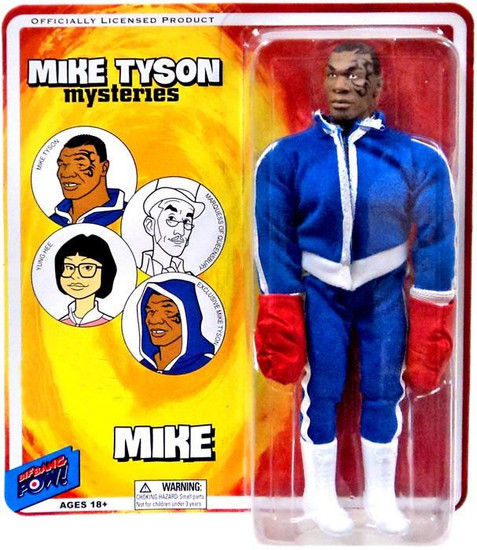 Entertainment Earth Convention Exclusive! Solving mysteries is what Mike Tyson is all about. He used to rain violent descruction on anything in front of him, but today he's all about helping others by solving mysteriess! Iron Mike also comes to the world of toys as this retro Mike Tyson Mysteries Mike Tyson 8-Inch Action Figure from Bif Bang Pow!. It's the first-ever action figure based on the series!

Featuring Tyson's trademark tattoo on his face, a rich blue and white cloth sweatsuit with boots, and in this exclusive, stuffed red vinyl boxing gloves, this 8-inch scale action figure is just the thing to keep your desk safe! It features multiple points of articulation, fabric clothing, and a retro style reminiscent of the bestselling action figures of the 1970s and 1980s. Ages 18 and up.

- Solving mysteries is what Mike Tyson is all about!
- 8-inch action figure based on the TV series Mike Tyson Mysteries.
- The first-ever action figure based on the new series coming Fall 2014 on Adult Swim!
- Convention Exclusive includes stuffed red vinyl boxing gloves!
- Multiple points of articulation, fabric clothing, and retro 1970s/1980s style.
- He even has a tattoo on his face!