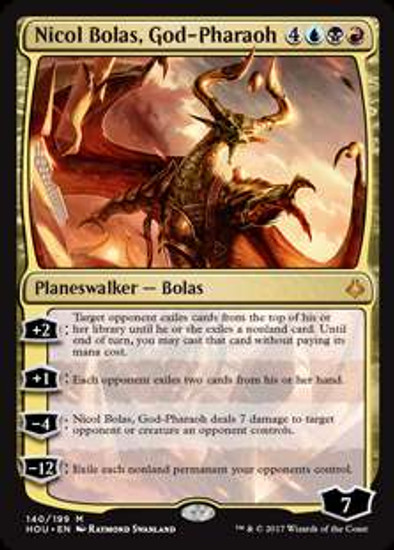 Planeswalker - Bolas. 4UBR. +2: Target opponent exiles cards from the top of his or her library until he or she exiles a nonland card. Until end of turn, you may cast that card without paying its mana cost. +1: Each opponent exiles two cards from his or her hand. 4: Nicol Bolas, God-Pharaoh deals 7 damage to target opponent or creature an opponent controls. 12: Exile each nonland permanent your opponents control.
mtghourofdevastationnicolbolasgodpharaoh
0666714235413
167131
Out of Stock
New

MtG Hour of Devastation Uncommon Angel of the God-Pharaoh #4

MtG Rise of the Eldrazi Mythic Rare Sarkhan the Mad #214