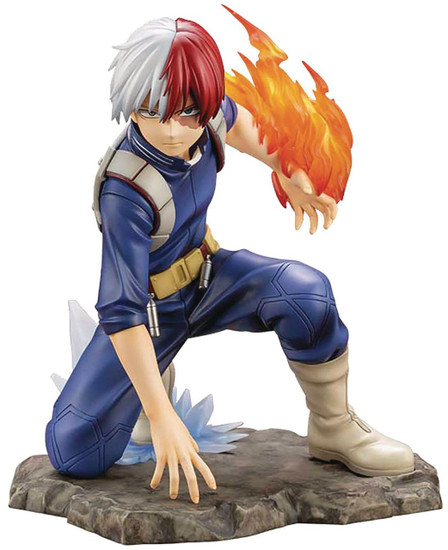 The next character from the hit anime series My Hero Academia to join the ARTFX J line is Shoto Todoroki! The My Hero Academia ARTFX J series depicts popular characters from the show in a moment of truth as they face off against a villain. Although hidden by his cool composure, Todoroki's burning passion shows through in this dynamic 1/8 scale statue. The flame parts on the figure's left arm can be removed, giving you the option to display the young hero using both sides of his unique Half-Cold Half-Hot Quirk. Display Shoto Todoroki alongside his classmates Izuku Midoriya, Katsuki Bakugo, and Ochaco Uraraka to recreate the world of My Hero Academia!
dec188882
190526015258
285754
Out of Stock
New

My Hero Academia Age of Heroes All Might 7.9-Inch Collectible PVC Figure Vol.1

My Hero Academia The Amazing Heroes All Might 8.1-Inch Collectible PVC Figure #05

My Hero Academia Grandista All Might 11-Inch PVC Figure Vol.2