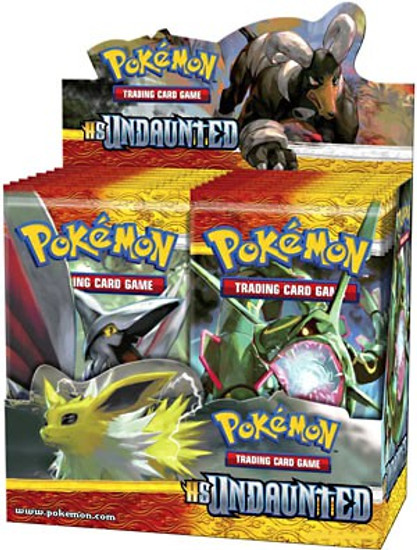 No challenge too great, no battle too fierce: HS Undaunted.
The greatest Trainers are those who are fearless in the face of battle. And that's you! In the Pokemon TCG: HS Undaunted expansion, youll discover battle-ready Pokemon just waiting to be summoned by the fearless Trainer in you! The powerful Rayquaza and Deoxys become a Pokemon LEGEND to be reckoned with...six Pokemon from Raichu to Umbreon to Slowking join the ranks of Pokemon Prime...and Stadium cards like the Ruins of Alph and Trainer cards like Legend Box change every player's strategy. Are you ready to be Undaunted? Pokemon HS Undaunted features 90 new Pokemon cards and remains compatible with previous releases.
pokemonhs3box
820650115400
118750
Out of Stock
New