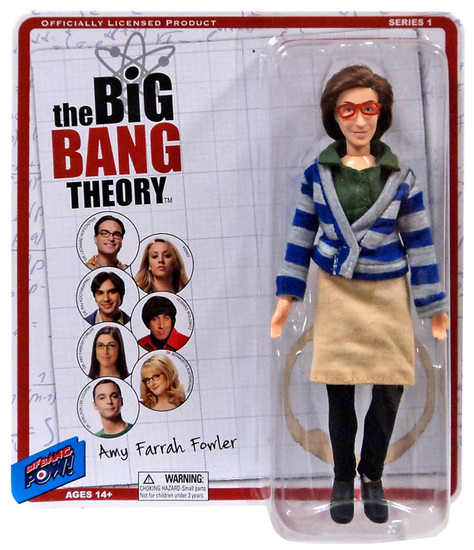 Looking for a neurobiologist with a high libido? Aren't we all! This Big Bang Theory Amy Fowler 8-Inch Action Figure from Bif Bang Pow! comes straight from the CBS sitcom The Big Bang Theory. Standing about 8-inches tall in her familiar muted attire and a retro style that harkens back to the bestselling Mego action figures of the 1970s and 1980s, this plastic figure features multiple points of articulation. It will put you right there on the set with Sheldon, Leonard, Penny, and the whole gang. And if you're a fan of The Big Bang Theory, Mego, or retro figures in general, you're going to want them all! After all, it's the intelligent thing to do. Other figures sold separately.
Dr. Amy Farrah Fowler (Mayim Bialik) - is a neurobiologist who first popped up as a possible match for Sheldon through an Internet dating site. (That Howard and Raj signed him up for without his knowledge!) Amy, like Sheldon, is a genius who has previously avoided relationships. In fact, she only met Sheldon because she was fulfilling her promise to her mother to go on at least one date a year. Things have changed for Amy, however, as she is now living the life she always dreamed of as a pubescent teen. Penny and Bernadette are her best friends and she has succeeded in making Sheldon Cooper her boyfriend. (Relationship agreement penned by him, of course. Swoon!) Superpowers: Dissecting brains in the name of research, playing the harp Weaknesses: High libido, Pennys smile
retroamy
814826016028
124208
Out of Stock
New