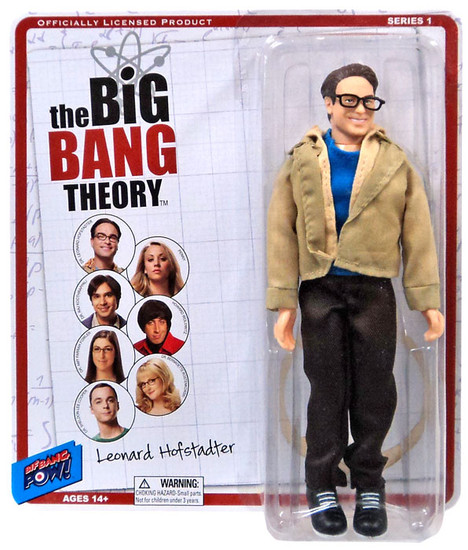 You need another socially challenged, hyper-intelligent physicist in your collection, don't you? Who doesn't?! This Big Bang Theory Leonard 8-Inch Series 1 Action Figure from Bif Bang Pow! comes straight from the CBS "nerd-com" The Big Bang Theory. Standing approximately 8-inches tall in series-true fabric clothing and a retro style that harkens back to the bestselling "Mego" action figures of the 1970s and 1980s, Leonard Hofstadter features multiple points of articulation. Ordering him is the smart way to go.
Dr. Leonard Hofstadter (Johnny Galecki) is "Everyman" - provided "Everyman" has an IQ of 173 and Ph.D. in Experimental Physics. When he's not doing research at the University, Leonard lives in an apartment with colleague and friend Sheldon Cooper. Together, they proudly share a love of superheroes, video games, and all things "geeky." Leonard's family is composed of many accomplished academics, including his mother, Dr. Beverly Hofstadter, and his brother and sister. Superpowers: Solving differential equations, playing the cello. Weaknesses: Eyesight, lactose intolerance.
retroleonard
814826015977
83613
Out of Stock
New