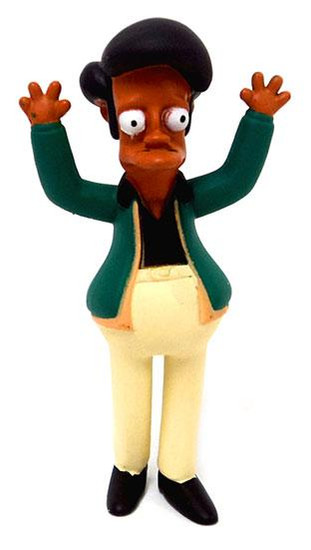 The Simpsons is an American animated television series created by Matt Groening for the Fox Broadcasting Company. The series is a satirical parody of a working-class American lifestyle epitomized by its family of the same name which consists of Homer, Marge, Bart, Lisa, and Maggie. The show is set in the fictional city of Springfield, and lampoons American culture, society, television and many aspects of the human condition.
# 2-4 inch pvc figure
# Highly detailed sculpts
# Scaled to match all Simpsons 20th anniversary figures,Self standing figures makes for easy display
# Officially licensed by Fox The Simpsons,Includes removable character name tag
simpsons20apu
845495000544
149229
Out of Stock
New

That Time I Got Reincarnated as a Slime Ichiban Rimuru Summer 7.28-Inch Collectible PVC Figure

The Simpsons Be Mine Bust Ups Series 5 Homer & Marge Figure