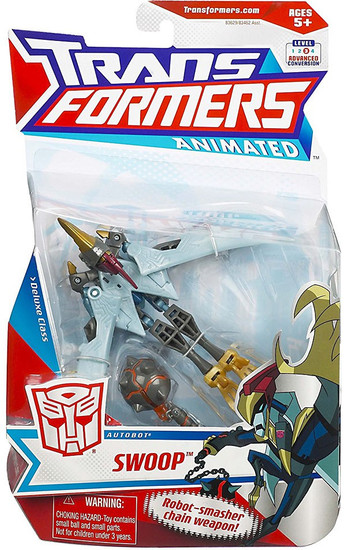 Transformers Animated Swoop is an overwhelmingly impressive addition to the ranks of the Dinobots. Swoop transforms into a very wicked Pteranodon, and his sleek robot mode is equipped with a monstrous magma-like flail. Swoops robot mode appears to support articulation at the neck, shoulders, elbows, hips, knees and ankles. Originally an animatronic dino, Swoop was infused with the power of the AllSpark, evolving into a Dinobot alongside Snarl and Grimlock. Deferring to Grimlock as the Dinobot leader, Swoop, preferring the comparative peace of airborne pursuits, seems less inclined towards mindless destruction than Snarl. Swoop and his fellow Dinobots, vulnerable to the influence of inveigling spider chicks, were recruited by Blackarachnia in an ill-fated attempt to excise the latters organic form.
animatedswoop
653569341932
117560
In Stock
New