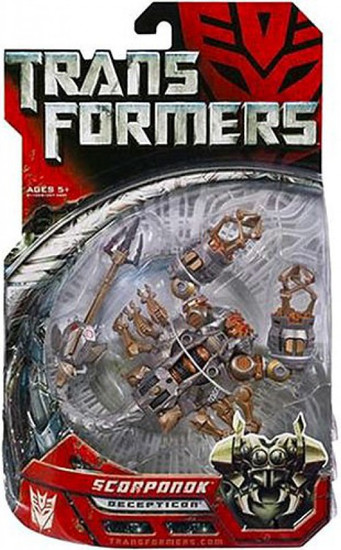 Scorponok is barely what the other TRANSFORMERS would even call alive. His core programming is only a tiny bit more complex than pure instinct. In most things, he acts almost entirely as an animal. He never speaks, and lives only to hunt and destroy. Unlike most of his fellow robots, he prefers his alternate mode with its energized stinger and drill-claws, to his robot mode. Capable of burrowing through solid earth at nearly eighty miles per hour, he can be a terrifying opponent as he springs suddenly upon his target in a shower of dirt from the ground.

Convert this DECEPTICON figure from menacing robot mode to scorpion mode and back again! It features spinning, drilling pinchers in robot mode and a spring-loaded stinger attack in scorpion mode! This is one awesome figure for your collection!
deluxescorponok
653569111108
192080
Out of Stock
New