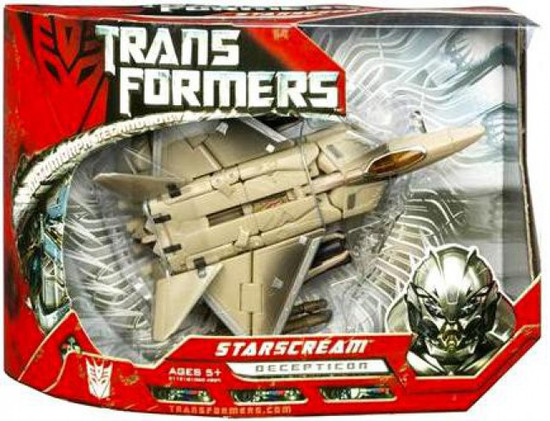 Starscream, renowned traitor and Deception malcontent, is one of the more out-looking robots of the Voyager Class. Starscream?s F-22 Raptor transforms into a bulky apelike robot topped by a bell-shaped semi-insectoid-head. Starscream?s thick, blunt arms are equipped with talon-rimmed revolving missile-launcher appendages. Despite Starscream?s bizarre and monstrous structural design, he boasts a pretty high level of articulation. The movie version Starscream is described as being as vain and as treacherous as his memorable cartoon incarnation. Plying his secret agenda with various acts of subversion and duplicity, Starscream is prissily disdainful of Megatron?s tastes for aggression and direct conflict. Leading a supposed mission to recover the missing Megatron, Starscream yearns to permanently rule the Decepticons, though his attempts to crystallize his position are countermined by the Decepticons, such as Blackout, who remain loyal to Megatron.
voyagerstarscream
653569111078
192189
Out of Stock
New