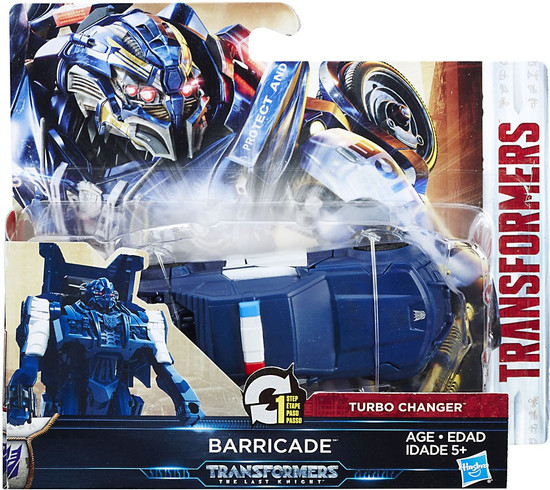 Experience the thrill of quick conversion with Turbo Changer figures that switch modes in 1 step. Convert this 1-Step Turbo Changer Cyberfire Barricade figure from robot to police car mode with 1 exciting motion. This Barricade figure features eye-catching detailing with hidden Cyberfire symbols that can be revealed using the Mega 1-Step Turbo Changer Dragonstorm figure.
In the explosive Transformers: The Last Knight movie, new evil will rise in an epic struggle where the fate of Earth hangs in the balance. Barricade is as sinister as they come. He takes down his enemies by skillfully deceiving them. His eternal mission is to destroy all Autobots. When nothing is set in stone, all Autobots must watch their backs for this menacing force.
1-Step Turbo Changer Cyberfire Barricade figure
Designed with eye-catching, Cyberfire detail
Converts between robot and police car modes
Converts in 1 quick step.
transmv51stepbarricade
630509516612
156823
Out of Stock
New