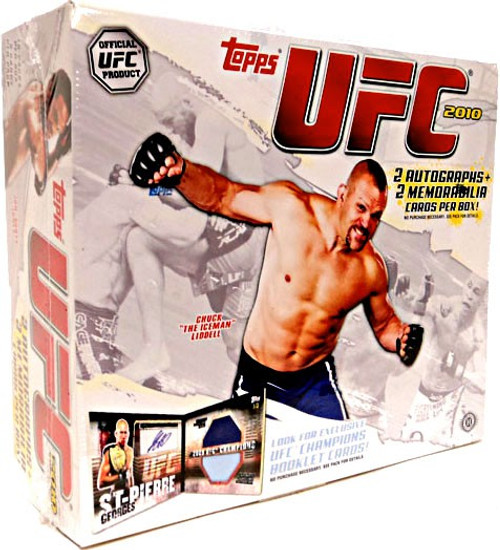 Each Box Contains: One (1) Autograph OR Autograph Relic OR Relic Card
Autograph Cards:
* FIGHTERS & PERSONALITIES: UFC stars with their signatures.
* NEW! FIRST ISSUE: Over 20 first-time signers such as Antonio Rogerio Nogueira, Matt Hughes and Cain Velasquez are honored on special "First Autograph Issue" stamped cards!
(Fighters & Personalities and First Issue are available in the following parallels):
. DIAMOND: ONE OF ONE!
. RUBY: Numbered to 8
. ONYX: Numbered to 88
* NEW! THOUGHTS FROM THE BOSS: Pairs Dana White and a fighter plus each of their autographs. Numbered to 25.
* BLOODLINES: 5 competitors proudly display their heritage and an autograph. Numbered to 25

Relic Cards:
* NEW! TALE OF THE TAPE: Featuring fighterworn fist tape from 15 UFC fighters. Numbered* to 25.
* FIGHT MAT: 40 fighters with an actual piece of a mat from a highlighted fight.
* ULTIMATE GEAR: 20 UFC pros appear on cards with fighter-worn relic pieces such as gloves, shorts or shirts.
(Fight Might and Ultimate Gear Relics are available in the following parallels):
. DIAMOND: ONE OF ONE!
. RUBY: Numbered to 8
. ONYX: Numbered to 88
. GOLD: Numbered to 188

Insert Cards: (1 per box)
* GREATS OF THE GAME: 15 cards featuring fighters and video graphics from "UFC 2010: Undisputed"
* OCTAGON OF HONOR: 10 past champions and UFC Hall of Famers are displayed on these cards.
* PRIDE AND GLORY: 15 highlight cards from the popular PRIDE Fights.
* BLOODLINES: Spotlights the national heritage of 15 fighters with the card backs featuring English and the fighter's native language.
(All above Inserts are paralleled):
. DIAMOND: ONE OF ONE!
. RUBY: Numbered to 8.
. ONYX: Numbered to 88.
* FIGHT POSTER REVIEW: 2010 Topps UFC continues a program commemorating over 150 actual UFC posters. The next 25 are inserted here.
2010toppsufcbox
041116609664
207406
In Stock
New