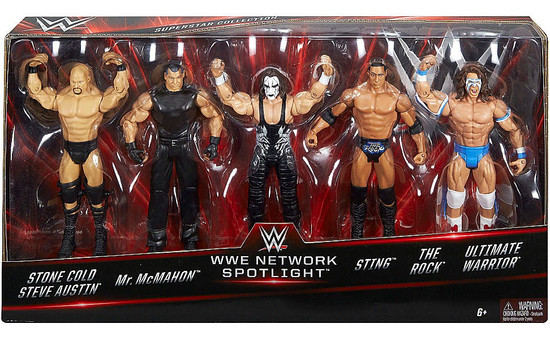 Stone Cold Steve Austin, Mr. McMahon, Sting, The Rock & Ultimate Warrior.
Relive the excitement as seen on the WWE Network with this WWE Elite figure that celebrates one of the most popular WWE Superstars.
Can you smell what The Rock is cookin'? Wrestlemania and WWE Smackdown fans alike can set up the wrestling showdown of the century with the WWE Network Spotlight Action Figure 5-Pack. From the Rock's People's Elbow to Stone Cold Steve Austin's Stun Gun, these articulating figures can be posed and moved to recreate your favorite moments in the ring. Plus, their body parts and gear are all interchangeable, so you can create the WWE Superstar of your dreams and keep each matchup fresh and new.
wwenetspot5pk
887961330786
138321
In Stock
New