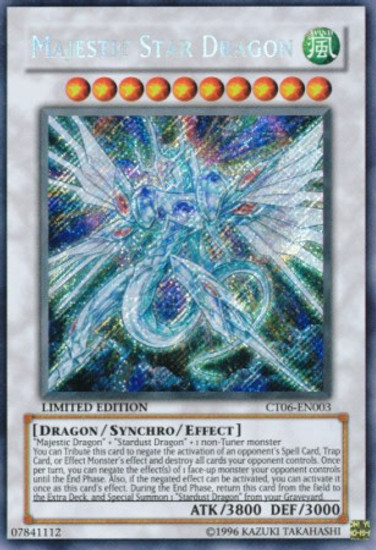 [Dragon/Synchro/Effect] LV10 ATK/3800 DEF/3000
"Majestic Dragon" + "Stardust Dragon" + 1 non-Tuner monster
When your opponent activates the effect of a Spell, Trap or Effect Monster, you can tribute this card to negate it, and destroy all cards your opponent controls. Once per turn, negate the effect(s) of 1 face-up monster your opponent controls until the End Phase. That monster's effect(s) can be treasted as this card's effect and can be activated once. Return this card to the Extra Deck during the End Phase and Special Summon 1 "Stardust Dragon" from your Graveyard.
ct06en003
643690302773
203385
Out of Stock
New