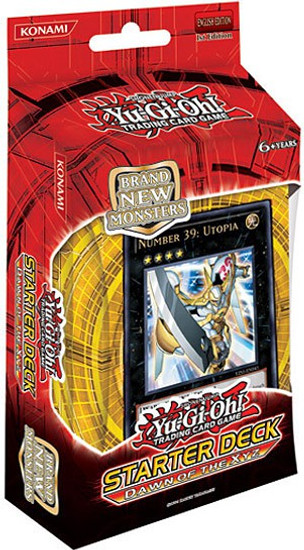 MAY BE 1ST EDITION OR UNLIMITED!
Out of Stock
(You save )

Exciting times are upon us for the Yu-Gi-Oh! property. Theres a brand new Yu-Gi-Oh! animated series on the horizon, and with it comes an all new kind of monster! These revolutionary monsters will make their spectacular North American debut in the 2011 Starter Deck. The 2011 Starter Deck serves two roles. Its designed to teach new players the ins & outs of the Yu-Gi-Oh! TCG. Its also to teach current players about this brand new category of monsters. And its the first place for Duelists to get their hands on these hot new monsters. The first booster set with the new monsters will be releasing in August 2011. But Duelists who want to be ahead of the game will get a leap forward by picking up their new monsters in this Starter Deck!