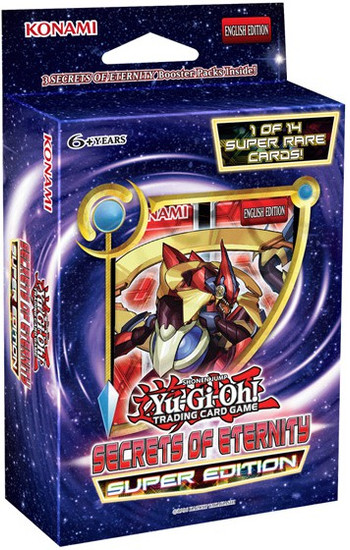 Super Editions are a great value for all Duelists! Each box of the Secrets of Eternity Super Edition comes with 3 booster packs of Secrets of Eternity, plus 1 of 14 Super Rare cards to power up your Deck!
Build up your Deck with more cards for new tournament favorites like Burning Abyss, Shaddolls, and Stellarknights, or uncover the secrets of the pit to reveal the mighty Infernoids, a brand new Deck theme that carries out wicked effects to banish your opponents cards. The Super Edition gives Duelists another opportunity to grab another Super Rare card from Secrets of Eternity, like Skilled Blue Magician and Thunderclap Skywolf, the Synchro Monster Superheavy Samurai Warlord Susanowo, Trap card Void Launch and Spell card Good & Evil in the Burning Abyss.

With one guaranteed Super Rare card in each Super Edition box, plus the 27 cards from the 3 booster packs, Duelists can power up their Decks for less than it would cost to buy 3 individual booster packs!