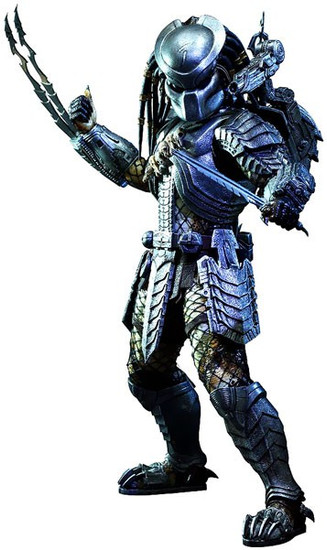 We carefully inspect each of these figures for damage. Due to the collectibility and fragility of this item, we cannot accept a return once it has been opened.
$899.99
(You save )

Sideshow Collectibles and Hot Toys are proud to present the Scar Predator Sixth Scale Collectible Figure from the film, Alien vs. Predator. The movie-accurate Scar Predator collectible is specially crafted based on his image in the movie, highlighting the newly developed head sculpt, highly detailed body armor, weapons and accessories, and detachable light-up mask.

Authentic and detailed fully realized likeness of Scar Predator in the Alien vs. Predator movie
Realistic and accurate 1:6 scale, approximately 14 inches (35 cm) tall
Over 22 points of articulation
Newly developed head sculpt and thighs
Net on body and left & right arms
One (1) interchangeable expanded mouth
Six (6) pieces of interchangeable palms including:
One (1) pair of fists
One (1) pair of open palms
One (1) right palm for holding spear or shuriken
One (1) left palm for holding dagger
One (1) articulated shoulder cannon
One (1) extendable spear
One (1) metal dagger with sheath
One (1) shuriken
One (1) shuriken with blades
One (1) detachable face mask with LED light-up function
One (1) pair of forearm armor with six (6) interchangeable wrist metal blades of different lengths on right and self-destruct device on the left
One (1) chest armor and back armor
One (1) shoulder armor with straps
One (1) pair of thigh armor
One (1) pair of leg armor
Leather-like skirt with waist band
One (1) figure stand
avpscarpredator
4897011174938
248253
In Stock
New