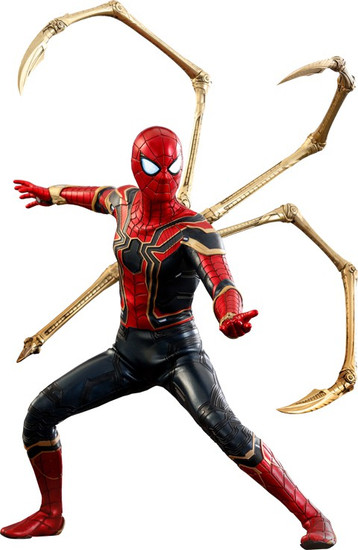 "Oh, were using our made-up names? In that case, I am Spider-Man."
This changes everything. The friendly neighborhood Spider-Man will have to use his wit, strength, and Spider-Sense to help the other heroes stop the warlord from enacting his master plan to collect all the powerful Infinity Stones.
The Marvel Cinematic Universe has led up to the massive battle in the blockbuster film Avengers: Infinity War. Sideshow and Hot Toys are thrilled to present the Iron Spider Sixth Scale Collectible Figure.
Designed by Tony Stark, the impressive brand new futuristic Iron Spider Suit is equipped with the latest amazing high-tech weaponry. The expertly crafted figure is based on the stylish appearance of Iron Spider with the most up-to-date details in the movie. The collectible figure features three interchangeable heads including a newly developed interchangeable masked head with LED light-up function, a masked head sculpt with four pairs of interchangeable eyepieces to create numerous combinations of Spider-Mans expressions and a newly painted interchangeable head sculpt featuring a remarkable likeness of Tom Holland. This sixth scale figure also includes a newly developed specialized body, a skillfully tailored metallic red and dark blue-colored Iron Spider suit with gold-colored trims perfectly capturing even the tiniest of details, two pairs of articulated Iron Spider pincers with stylish gold-colored painting, a variety of spider-web shooting effect parts and a movie-themed dynamic figure stand.
Power up your entire Marvel Cinematic Universe collection with this young Spidey in his new suit from Avengers: Infinity War!
hottoysinfinitywarironspiderman
4897011186061
257960
In Stock
New