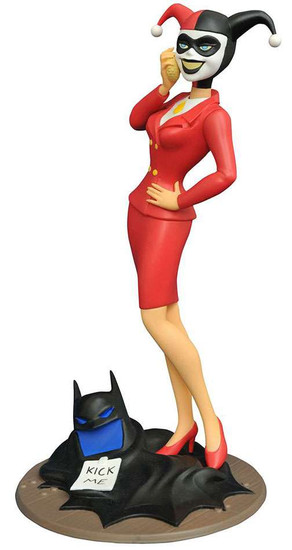 Who knew Harley Quinn was such a mistress of disguise! In this all-new PVC figure based on Batman: The Animated Series, a suit-wearing Harley Quinn re-applies her make-up after going undercover as a lawyer in the classic episode "The Man Who Killed Batman." At her feet lies Batman's cape and cowl, with a "Kick Me" sign stuck to the back. This 9" scale PVC figure features collectible-quality sculpting and paint applications, and is in scale to all Gallery and Femme Fatales PVC figures. Packaged in a full-color window box.
jul162607
699788814864
134630
Out of Stock
New