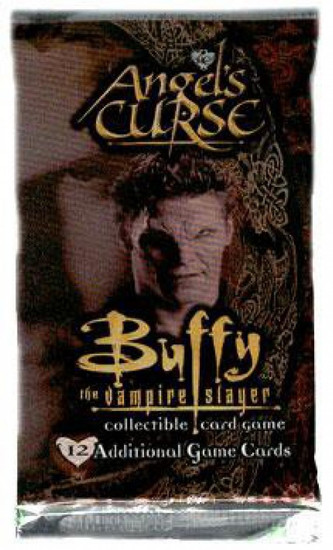 This is the newest expansion in the ever popular Buffy the Vampire Slayer collectible card game. This expansion is called "Angel's Curse" and it looks awesome!!! After a moment of true bliss with Buffy, the old curse falls upon Angel, transforming him into the evil Angelus. At the same time our hero falls into darkness, a new Slayer comes to Sunnydale. This 121-card set also includes three preview cards, four "Essence" cards, and 10 "Promo" cards. The set breaks down into 32 Commons, 50 Uncommons, 37 Rares, and two Ultra-Rares. Xander and Cordelia are now playable as main personalities; Angelus and Kendra have been added to the player roster; the Judge is included as a Villain, but is not a main personality; and Oz begins to show his werewolf traits. Event cards make their first appearance in Angel's Curse to be played during the Prologue Step and affect game play for both players, reflecting the major happenings and plot points that occur in the show. Only one Event card of each type can be played per game. 12 cards per Booster Pack.
bufvamslayco4
729946851797
184883
In Stock
New

She-Ra and the Princesses of Power Bow Doll