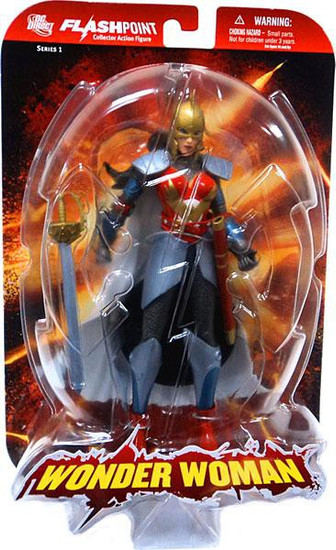 First, the DC Universe was plunged into darkness with BLACKEST NIGHT. Then BRIGHTEST DAY burned away the night.
And now?
EVERYTHING CHANGES IN A FLASH!
Comics' next big event is not a dream, or an imaginary story, or an elseworld.
But for Barry Allen?
It could be his worst nightmare.
The world as Barry Allen knows it has changed. With humankind on the abyss' edge of a cataclysmic war, Earth's Greatest Heroes are nowhere to be found. It's up to Cyborg, America's last hope, to gather forces new and old from across the Universe.
If The Flash can't find the villain who altered the timeline, the world may have no future at all.
Written by Geoff Johns with art by Andy Kubert, FLASHPOINT changes the DC Universe as we know it!
All four Flashpoint figures feature multiple points of articulation and include a display base. Character-appropriate accessories are also included.
fps1wonderwoman
761941302393
221162
Out of Stock
New