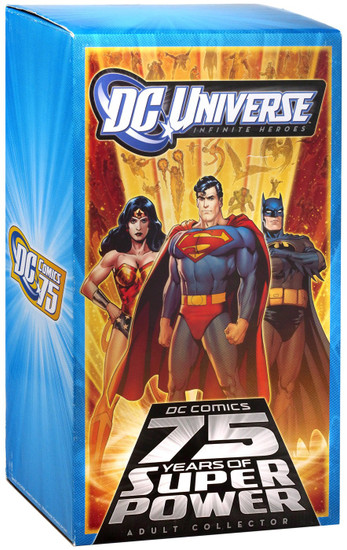 This special pack commemorates the 75th anniversary of DC Comics. The Starro pack re-creates one of the most famous DC covers of all time, the cover of Brave and the Bold Issue #28, the first appearance of the Justice League and Starro the Conqueror. Comes with all five JLA members featured on the cover as highly articulated figures in the same scale as Infinite Heroes. Includes Martian Manhunter, The Flash with added articulation, Wonder Woman (all new), Green Lantern (with construct), Aquaman (all new), and giant, bendy Starro. Box features lights and sounds with the voice of Kevin Conroy, TV's animated Batman, describing the characters and events seen on the cover.
starroconqueror
027084836301
206709
In Stock
New