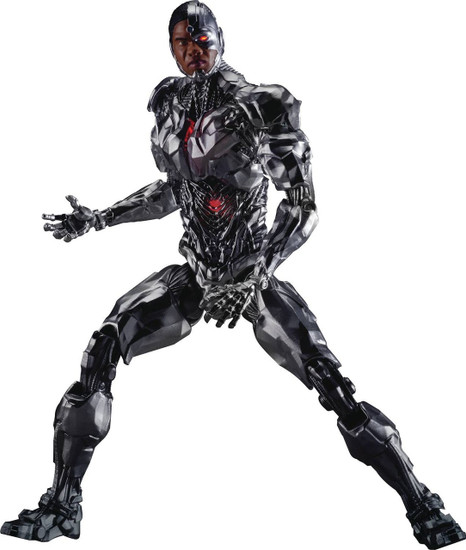 The superhero blockbuster Justice League features Ray Fisher as Victor Stone the Cyborg. Originally a deadly injured athlete, Victor Stone was later integrated with Mother box in his father's laboratory and turned into a half-human half-machine cyber organism, and accepts Batman's invitation to join the Justice League. Following the great reception for the Batman v Superman: Dawn of Justice (BVS), Beast Kingdom has released the Justice League series of characters from the latest DC comics: Cyborg, the cyber organism. Featuring delicate head sculpting, and its sleek multi-sided metal armor, this is a tech-savvy biochemical superhero with built-in LED glowing mechanism to show the red light effect from the armor, as featured in the movie. Its 20-plus maneuverable joints, replaceable palms, and cannon-fitted arms are to represent Cyborg's shape-shifting ready-for-war status in the story. Lastly, the figurine comes with special effect components to create the stockiness of Cyborg and the shock wave when he takes off.
oct178138
4713319852906
177267
Out of Stock
New