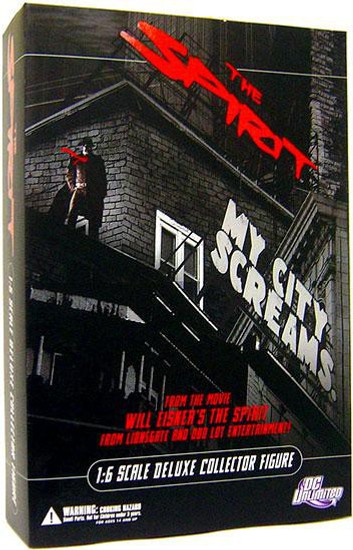 Adapted from the legendary comic strip,WILL EISNER'S THE SPIRIT is a classic action-adventure-romance told by genre-twister Frank Miller (creator of 300 and SIN CITY.) It is the story of a former rookie cop who returns mysteriously from the dead as the SPIRIT (Gabriel Macht) to fight crime from the shadows of Central City. His arch-enemy, the OCTOPUS (Samuel L. Jackson) has a different mission: he's going to wipe out Spirit's beloved city as he pursues his own version of immortality. The Spirit tracks this cold-hearted killer from Central City's rundown warehouses, to the damp catacombs, to the windswept waterfront all the while facing a bevy of beautiful women who either want to seduce, love or kill our masked crusader.
This 1:6 scale figure is clothed in an authentically detailed film outfit including suit, overcoat, hat and non-removable mask. Manufactured to order. Packaged in a deluxe 4-color window box with a fifth panel.
dc13ispirit
761941274560
117571
Out of Stock
New