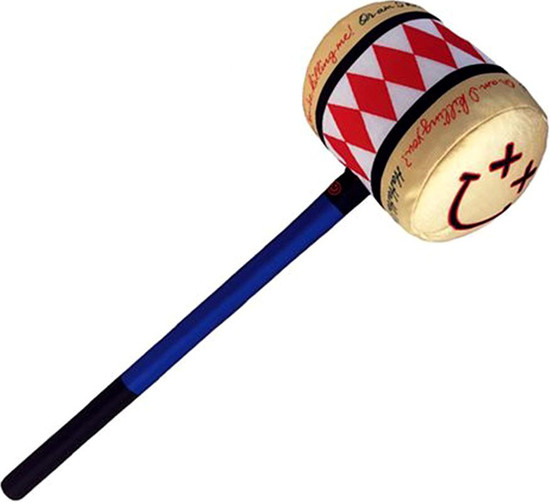 From Factory Entertainment. "We're bad guys, it's what we do." Factory Entertainment is thrilled to announce a couple of brand new additions to its line of collectible role-play / cosplay SWAT (Soft Weapons and Tactics) weapons -- from Suicide Squad: Harley Quinn's Good Night Bat and Harley Quinn's Mallet! To ensure the accuracy of each piece, WB provided Factory Entertainment's designers with access to the original screen used props from the film, as well as various assets and imagery from the set in order to truly capture what's seen on screen. Both the Good Night Bat and Mallet feature the as seen wording around each piece and other fine details, making these SWATs perfect for living out your Harley Quinn role-playing/cosplaying fantasy in a fun and friendly way! To further enhance the collectibles and to add another element of role-play, each Harley Quinn SWAT soft weapon features a series of sounds that play when swung through the air and on impact! SWATs capture the fun of stylized fantasy weapons, but executed in soft, safe for work and play materials, with sounds specifically tailored to each piece and are intended for ages 8 & up.
jul162687
5060224084526
134713
In Stock
New