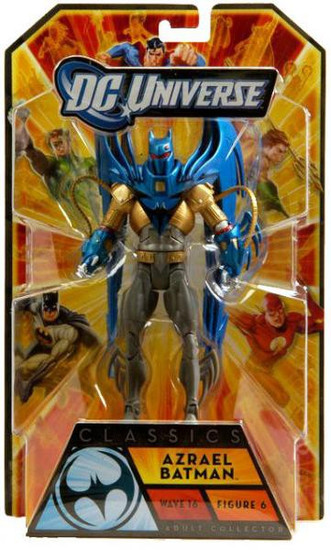 DC Universe Classics Azrael Batman in Knightfall Armor Collector Figure: Breaking free from the DC comic book pages is this 6" highly detailed collectible figure in its classic comic book styling. Featuring characters from the entire DC Universe, each figure is highly detailed and classically styled with superior articulation. All DC Universe Classics collector figures are authentically sculpted and designed by the prestigious Four Horsemen Studios. This exciting 6" scale Azrael Batman features Azrael in his Knightfall armor. Known as Batman and Azrael with his alter ego Jean-Paul Valley, during the Knighfall storyline. Originally appearing in Batman: Sword of Azrael comic series. Don't miss out on this exceptional figure. As part of series wave 16 this figure also includes a Collect and Connect figure piece, which collectors can collect and assemble to create another character. Collect all figures in this series to build character figure Bane. Collect them all. Each sold separately.
dc16classicazrael
027084964899
208172
Out of Stock
New