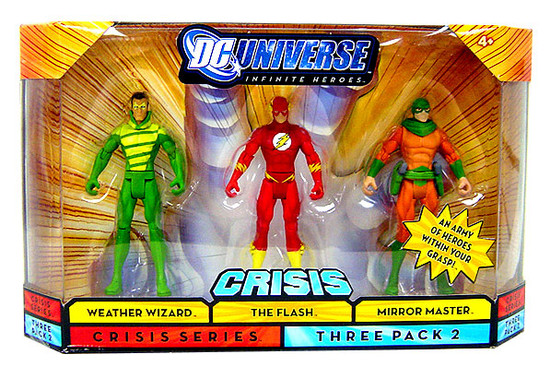 Long time collectors and newcomers alike will scramble to get their hands on these collectible figures. With bold colors and dramatic detail, this line features your favorites along with a whole army of heroes and villains. For the first time, DC Comics figures will be offered in the 3-3/4 scale, providing collectors a new scale to collect their favorite heroes and villains.

Weather Wizard is clad in a sleek green and yellow uniform. He originally used a wand to manipulate the weather, and more recently gained the ability to do so without the wand. The Weather Wizard allied with the group of Flash adversaries comprising the Rogues, and later represented the former among the ranks of the Secret Society of Supervillains.

The Flash is clad in the classic red and yellow costume. After being splattered with lightning-chemicals Barry Allen gained the abilities of super-speed and super-reflexes. Deciding to parley his new abilities into a superhero venture, he created his costume and called himself Flash after the original Flash. His powers solidified into such abilities as the traversal of dimension boundaries.