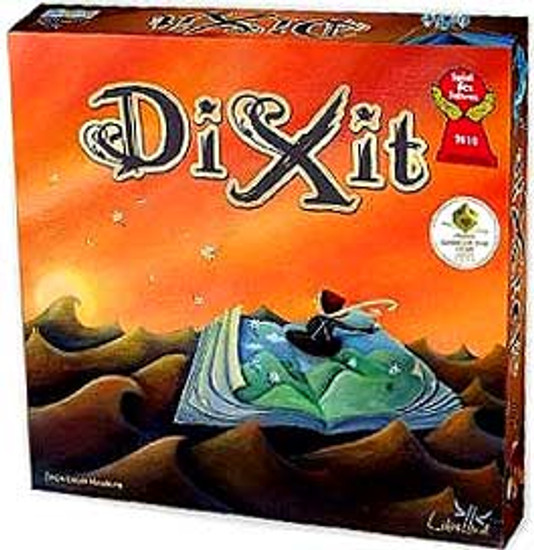 "Storytelling is the name of the game in Dixit, winner of both the French and Spanish board game of the year. On each turn, one player becomes the storyteller. This player makes up a sentence from one of the six interesting and abstract images in his hand. The other players select from amongst their six images the one that best matches the sentence made up by the storyteller. They each then give their chosen image to the storyteller who shuffles and lays the images down on the table. Everyone then votes on which image they think is the storyteller's. Points are scored (or not scored) based on vote tallies. The game ends when the last card has been drawn. The player who is the furthest on the scoring track wins Dixit! Dixit makes a great party game and is perfect for family game night!"
The players have hands of oversized cards with various artistic pictures. The active player secretly selects one of his cards and gives a very brief description. The other players secretly select their own cards which match the description. The chosen cards are shuffled and revealed, then players vote on which was chosen by the active player.Each correct answer gives points to the guesser and the active player. Each incorrect answer gives points to the player who submitted the guessed card. However, if all of the guesses are correct -- or none of them are -- then the active player gets no points and all the other players get points.The game ends when the deck is empty. The greatest total wins the game.
dixit
9782914849654
259165
In Stock
New

Descent Journeys in the Dark Board Game [Second Edition]

Get a Grip Game