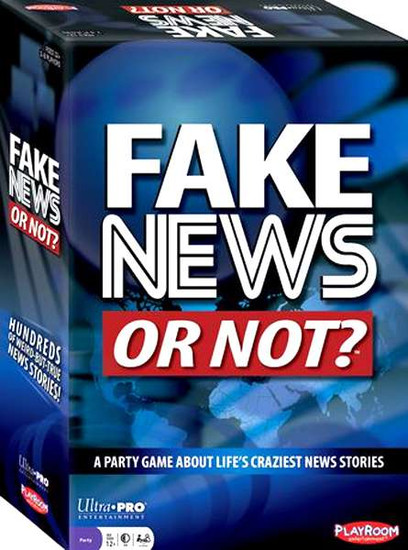 Fake News Or Not?

Fake News Or Not?

Perfect game for all your Cards Against Humanity & Triva fans!
Fake News or Not? is the captivating game about phony funny stories and ludicrous true tales! Life writes the craziest stories but what can we believe, and what is just a pack of lies? Who is telling the truth, and whose pants are on fire? Find it out with the game for know-it-alls, wiseacres, and lovers of interesting and trivial knowledge!
Includes: 200 Double-sided Fake News Cards, 16 Voting Cards, and instructions
Find out which stories are lies and which are true to collect points and win the game!
The party game about life's craziest news stories
Hundreds of weird-but-true news stories!
What did John F. Kennedy, Benito Mussolini and Napoleon Bonaparte have in common?
What unusual thing was caught in a fisherman's net in Australia in 2006?
What did Neil Armstrong find out when he returned from the moon?
fakenewsornot
803004668005
171131
Out of Stock
New

Betrayal at House on the Hill Widow's Walk Board Game Expansion