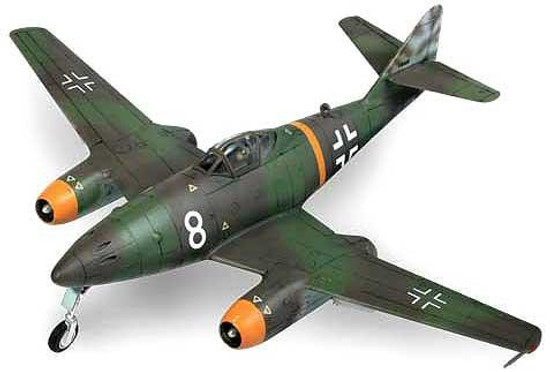 The German Messerschmitt Me-262 was the world's first operational turbojet fighter aircraft. Introduced into action in 1944, the German Luftwaffe used it in many roles, including use as a fighter, bomber, and in reconnaissance roles. The Me-262 was officially named the 'Schwalbe' (Swallow), and was nicknamed the 'Turbo' by German pilots and the 'Stormbird' by the Allies.

The Me-262s were very fast and were able to achieve a kill ratio of approximately four to one, but the limited numbers of Me-262s available minimized their overall impact on the war. They did successfully show the advantages of jet aircraft in a military role, and signaled the end of the piston-engined military aircraft. Their use of R4M rockets against Allied bomber formations was also very effective, and signaled the beginning of the use of air-to-air missiles as effective weapons.

This die-cast 1:72 scale German Messerschmitt Me262 is part of the Front Line Fighters series of die cast aircraft from Oxford Diecast. It depicts the 'White 3' Messerschmitt Me262 flown by 104-victory ace Lt. Gen. Adolph Galland of JV44 as it was seen in 1945.

This highly-detailed die-cast German Messerschmitt Me262 is approximately six inches long and has a wingspan of approximately 6.75 inches. It has many detailed features, including textured surfaces, a detailed cockpit with a glazed canopy, realistic engine nacelles, and authentic markings. This German Messerschmitt Me262 also includes a display stand that identifies the aircraft and pilot.
german1944me262
018876850339
208390
Out of Stock
New

Ghost in the Shell Batoh with Car PVC Figure