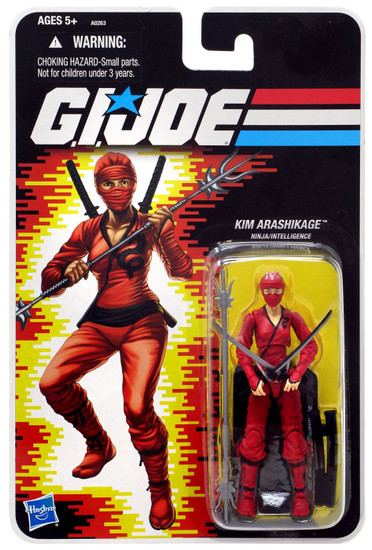 Kim "Jinx" Arashikage studied and competed in three forms of martial arts from the time she was seven until she graduated from Bryn Mawr. Upon arriving in Japan for a vacation, she discovered that her family had been ninjas for generations, and she was officially initiated into the clan. She was recruited for the G.I. JOE team by SNAKE EYES. This battle-ready KIM ARASHIKAGE figure has been carefully crafted to look like the character as she appeared in comic #24, "Ladies Day," issued in August 1989. Arm her with her weapons and stand her up in your collection! Whether she's in battle or on display, this Comic Con 2012 exclusive figure is a powerful presence! KIM ARASHIKAGE figure is a Comic Con 2012 exclusive! Figure looks like the character as she appeared in the August 1989 "Ladies Day" comic (#24). Arm her with her weapons! Figure comes with accessories. Ages 5 and up.
kimarashikage
653569773467
272224
In Stock
New