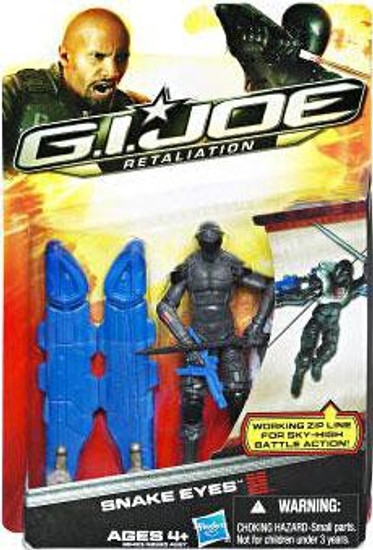 G.I. JOE is the ultimate commando but even he needs backup to fight the forces of COBRA! Your hardcore SNAKE EYES figure is armed to the teeth and ready to take on whatever his COBRA enemies (other figures sold separately) throw at him. If strength and cunning wont get the job done, his arm-mounted missile launchers fire missiles at his enemies! With 5 feet of string included, he can use his ninja zipline launcher to swoop into the fight! Will he and his weapons prevail against the forces of evil? Its all in your hands!
Rough and ready SNAKE EYES figure can fight at close quarters or from a distance with his arm-mounted missile launchers! Load a missile in one of the launchers, then press the button to launch. The figures zipline launcher has over 5 feet of string. Use the anchors to attach the line to objects! Send your figure zipping down the line!
Figure comes with weapon accessories and missile.