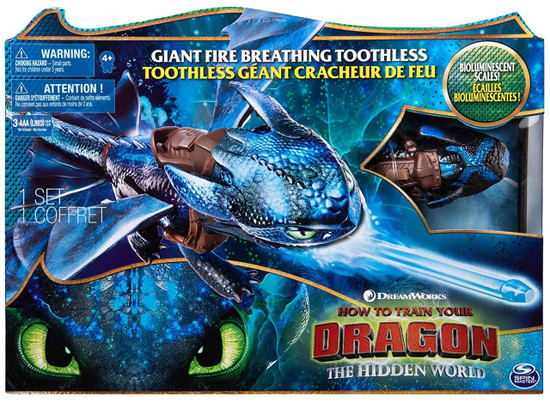 How to Train Your Dragon

How to Train Your Dragon

Behold the ultimate dragon, Toothless, from How to Train Your Dragon: The Hidden World with fire breathing and plasma blast action! Measuring over 20 inches long with 22-inch, pull-open wings, Giant Fire Breathing Toothless is loaded with exciting battle features. Bring Toothless to life with amazing, fire breathing effects. Fill the pack on his back with water using the dropper included. Then push the button behind his left ear to activate lights and smoke-like puffs of dragons breath. Load a glow-in-the-dark projectile into his mouth and push the button behind his right ear to fire! Toothless is not only ready to strike but looks striking with shimmery, metallic blue bioluminescent coloring from head to tailfinsjust like the movie character. Combine Giant Fire Breathing Toothless with Dragon and Viking figure sets (sold separately). Viking figures can ride on the special saddle on Toothless back for an awesome dragon and rider adventure! Take flight with the magical and majestic, Giant Fire Breathing Toothless!
htydhwgiantfiretoothless
778988167762
282926
In Stock
New

How to Train Your Dragon The Hidden World Toothless Wrist Launcher

How to Train Your Dragon The Hidden World Toothless Wrist Launcher

How to Train Your Dragon 2 Power Dragon Attack Set