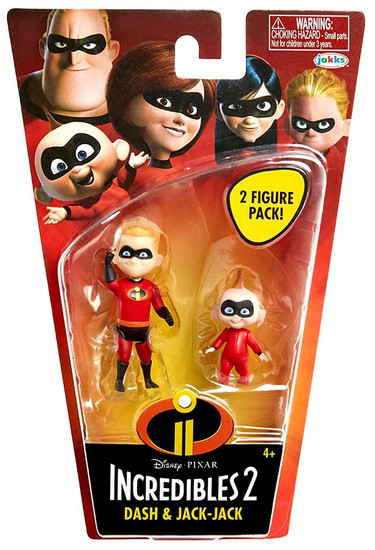 The Incredibles are back! Competitive and adventurous, Dash longs to be able to use his powers to fight bad guys like his parents. Like most toddlers, Jack-Jack Parr enjoys making messes at mealtime, getting into things he shouldn't, and chiming in on family conversations with his enthusiastic babble. Unlike most toddlers, and unbeknownst to his family, he actually has multiple hidden super abilities! Dash is articulated at the neck, arms and legs for fun possoble action! Jack-Jack is articulated at the neck and arms and both come with painted fashion customes. Collect all the 4" action figures from The Incredibles 2 line by Jakks Pacific (Each Sold Separately). Recommended for Ages: 3+
039897748092
039897748092
255473
In Stock
New