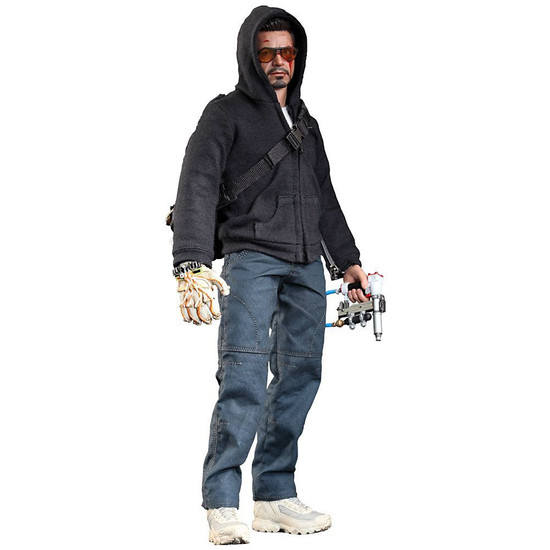 We carefully inspect each copy of this figure for damage. Due to the collectibility and fragility of this item, we cannot accept a return once it has been opened.
$332.99
(You save )

Tony Stark, the beloved hero and billionaire genius, is facing a few challenges in Iron Man 3; terrorists have badly injured his dearest friend, blown up his house, kidnapped his girlfriend, and almost destroyed his newest Iron Man suit. Despite this downward spiral, Tonys resolve to take down the Mandarin has not wavered. Sideshow Collectibles is proud to present Hot Toys' Tony Stark (The Mechanic) Sixth Scale Collectible Figure, decked out with Tonys homemade weapons and gadgets used to infiltrate The Mandarin's mansion. The movie-accurate Tony Stark Collectible Figure is specially crafted based on the image of Robert Downey Jr. as Tony Stark, wearing his battle damaged 'civilian' attire; highlighting a newly developed head sculpt, advanced body with light up chest, and detailed weapons and accessories.
The Tony Stark (The Mechanic) Sixth Scale Figure features:
Authentic and detailed fully realized likeness of Robert Downey Jr. as Tony Stark in Iron Man 3
Battle damaged head sculpt with movie-accurate facial features with detailed beard, wrinkles and skin texture
Approximately 12 inches (30 cm) tall
Advanced body with over 30 points of articulation, specially designed for Tony Stark
LED light on chest (battery operated)
Metallic gold and red paint on interchangeable Mark XLII armor parts including:
One (1) right forearm armor
One (1) left leg armor
Eight (8) interchangeable palms including:
One (1) pair of palms for holding gun
One (1) pair relaxed palms
One (1) left palm for holding weapons
One (1) gloved right palm with wire
One (1) right armored palm with improved articulations, movable fingers and light-up repulsors (white light, battery operated)
One (1) right armored repulsor palm
Each piece of head sculpt is specially hand-painted
One (1) white vest
One (1) pair of dark blue jeans
One (1) pair of white sneakers
One (1) black zip hoodie
One (1) submachine gun
One (1) nail gun
One (1) stun gun
One (1) Christmas ornament
One (1) augmented-cognition headset with holographic effect
One (1) pair of sunglasses
One (1) watch
One (1) backpack
One (1) newspaper
One (1) clamp
One (1) dart with wire
One (1) container with syringe
Figure stand with Tony Stark nameplate and the movie logo
hottoysim3mechanic
4897011175348
79528
Out of Stock
New